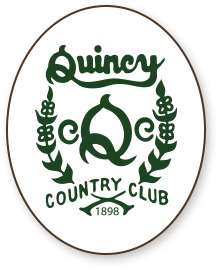 The Quincy Country Club tennis program is designed for players of all ages and ability levels. For juniors, we feature a complete instructional program for youngsters ages 3 to 18, to both introduce the game to preschool players as well as to develop the games of high school players. For adults we have a ladies doubles clinic and competition as well as a beginning ladies clinic. For men we organize and run a round robin club championship tournament as well as several social mixed doubles round robins. Our program is run by USPTA professional Mike Terry with the help of USPTA and USPTR professional Monica Hinkamper along with the top junior and college players in the area.

Pickle-ball is played on a badminton-sized court: 20’ x 44.’ The ball is served diagonally (starting with the right-hand service-square), and points can only be scored by the side that serves.

Players on each side must let the ball bounce once before volleys are allowed, and there is a seven-foot no-volley zone on each side of the net, to prevent “spiking.” The server continues to serve, alternating service courts, until he or she faults. The first side scoring eleven points and leading by at least two points wins. Pickle-ball can be played with singles or doubles.

Serves are to be made diagonally, starting with the right-hand service-square and alternating each serve. The serve must clear the seven-foot non-volley-zone in front of the net and land in the diagonal service court.

Serves should always be done underhand with the paddle below the waist, and the server must keep both feet behind the back line when serving. The ball should be hit into the air without being bounced. The serving side will continue to serve until the there is a fault on the service, at which point the service will be given to the opposing side. (However, if the ball touches the net but still lands within the appropriate service court, the serve may be taken over.)

The Server must keep both feet behind the back line when serving. The service is made underhand with the paddle contacting the ball below the waist. The Server must hit the ball in the air on the serve. The Server is NOT allowed to bounce the ball and hit it off the bounce. The service is made diagonally cross court and must clear the non-volley zone, including the line (A serve that hits the non-volley zone line is out) Only one serve attempt is allowed, except if the ball touches the net on the serve and lands in the proper service court,in this case the serve may be taken over. At the start of each new game, the 1st serving team is allowed only one fault before giving up the ball to the opponents. Thereafter both members of each team will serve and fault before the ball is turned over to the opposing team. When the receiving team wins the serve, the player in the right hand court will always start play.

To volley means to hit a ball in the air without first letting it bounce. In Pickle-ball®, this can only be done when the player’s feet are behind the non-volley zone line (seven feet behind the net). Note: Is is a fault if the player steps over the line on his volley follow-through

A fault is committed when the ball:

A team shall score a point only when serving. A player who is serving shall continue to do so until a fault is made by his/her team. If playing doubles, each player on a team shall keep serving until their team makes a fault, then the serve moves to the opposing team – this is called a Side Out. The game is played to 11 points, however a team must win by 2 points.